There is a reason why one picks up on former Miss World Aishwarya Rai Bachchan each time she steps on the red carpet in Cannes and she has been doing so for no less than ten years now. Reasons being many ranging her faux pas in the forms that we talk about her figure to pout to designer choice to gown colour to walking partner and so and so. And all of these universally critically analysed and unanimously agreed upon over the verdict conferred each time. Verdict: Largely flop, handful appreciated.

How does she manage it? As i tweeted: Either there is a problem with the designers’ bad designing or at least admit your choice is consistently gross. The most beautiful woman in the world has to or must look perfect all the time, the pressure is immense, the expectations from her colossal, therefore it usually ends up falling flat on the ground and viewers are held up yearning forever. Have compiled her each presence on the red carpet from the year 2001 to date. Now weep.

In 2003 in Neeta Lulla creation got much flak for

In 2003 in Neeta Lulla creation got much flak for

In 2007 in an Armani wear but AB pleaaaseeee

In 2008 in magenta with the whole paltan

In 2008 much talked about green floral disaster

In 2008 much talked about green floral disaster

In 2009 in those where you pun at the designer by saying Qawaali yes this is Cavalli.

In 2010 in Sabyasachi Mukherjee. Saved her. Alongside are Mani Rathnam & Suhasini not in pic.

In 2010 in an Eli Saab attire is good but make up and hair took it all away.

Welcome to 2011 with Eli Saab. Doesn’t work for me the top frock. Brrr. And old and flabby now.

Most clicked woman in the world: Lady Diana

Now if one is going to be updating the blog after almost an year, none other than the most beautiful person that ever lived on earth would have inspired/motivated me to do so. Yes, she is Princess Diana. With the Royal wedding of Prince William with a commoner college love Kate Middleton that just got over last week, Princess Diana’s absence was indeed the most conspicuous.

The one woman whose each image speaks reams & reams & is worth a million, one just cannot but stare at each for hours and still not get enough. The unmatched, the invincible fashion icon, the diva who inspires each woman who can only dream to be born with that grace in the next life as one can never be like her or imitate to come even close to that aura she was blessed with.

Have just collected some glorious pictures from the net and compiled an album for you all to view and be in awe of. So just enjoyy!!! Photo courtesy: Various websites.

Brazil, Argentina, England, France, Italy, Portugal were those which shocked the whole world by their unprecedented exit. Some humiliating, some lack-lustre with reasons best known to them returned home, hoping that they do some serious reality check. Whereas Paraguay, Ghana, Uruguay, Slovakia showed grit and determination to prove their worth on the biggest spectacle of the king of sports.

The one team which stole the hearts of millions by their stunning display of the game, the youngest of the whole lot, the most inexperienced side in the World Cup, with their uninhibited exposition of courageous football was Germany. Headed by their (handsome ;)) coach Joachim Löwe, the team reached semi-finals beating England in pre-quarters, Argentina in quarters only to be defeated by the prospective champions Spain in the semis. This brilliant team were also known to be the most multi-culti assemblage comprising Pudolski, Lahm, Klose, Özil, Khedira, Müller, Neuer, Friedrich, Schweinsteiger, Jansen, Mertesacker, Boateng and others altogether who scored 16 goals in all, highest in number in the tournament. The 20 yr old Thomas Müller outshone the most with 5 goals and 3 assists in his name was awarded the Golden Boot as well as the Hyundai Best Young Player Award. Miroslav Klose came as close as 14 goals, one short of Ronaldo with 15, for the most number of goal scorer in the history of World Cup. 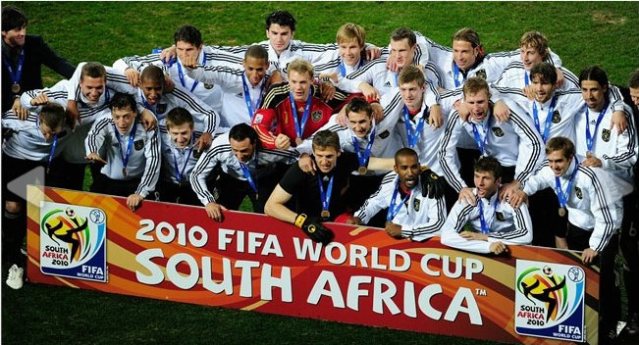 Surely I am biased towards Germany, but everyone  seems to be agreeing with the way I feel. The team who brought Rooney’s England crashing out 1-4 and hung Maradona’s head down in disbelief after a 0-4 defeat for Argentina, surely got standing ovation by the entire world. Finally they came back home grabbing the bronze medal by beating Uruguay in a thrilling 3-2 which everyone claimed was the actual final in all footballing terms.

Would like to quote @mojorojo here for his brilliant tweet during the final between Spain and Nederland – “So basically Germany won, Uruguay are 2nd, and the lamest 3rd place game EVER is currently on.” Also @FinancialUAE –“ Frankly neither team deserves to win after this dreadful display. Let’s give the cup to #Ger instead.”

And that’s all I wanted to hear 🙂

John Isner recently appeared in David Letterman’s Late Show to do a ‘Top 10 list’ on the thoughts that went through his mind while playing that historic match. It can’t get more hilarious than this, just read on.

25th June, 2010 It’s hard to believe that Michael Jackson is no more. We have completed one year since he left us forever. But we know he shall continue to reside in millions of hearts till eternity. He was a legend who is born only once. No one before or after can ever replace the stature, the zenith, the pinnacle of creativity, talent, success that he touched through his inimitable mélange of music, songs, lyrics and dance. He was that magician when came on stage, we cried, we lost senses, we reached heavens. We thank God endlessly for having given MJ to us in our lifetime.

We don’t care what certain people think about you, we loved you for your music and will continue to do so. You had a bitter personal life, but you emerged stronger and larger than life out of all those turbulences. Till the last breath you fought trying to win over all the negativities surrounding you, not many can do so.

You will inspire generations. Music bows to you, is grateful to you. We thank you MJ, you will be missed. Forever.

I shall end my special tribute with one of my favorite videos ‘Dirty Diana’. Enjoy!

The winner is Alisar. Thumbs Down. Obviously, both the finalists weren’t of my choice. Having Leyla and Victoria in the top 10 and letting them go is exactly where the show became a failure. Sorry to say, Heidi you couldn’t nail it this time. Successor of Sara Nuru – Alisar. WTH. Some more Sara Nuru pics. Now, you decide.

Hanna, Heidi Klum and Alisar waiting for the big moment

Small joys of life, travelling by train is certainly one of them. If one hasn’t been on a Euro-rail even once after being in Germany for five years, it is a pity indeed. So when husband told me that we have travel to Wolfsburg by DB [Deutsche Bahn (railways)] and drive back with my new car from Volkswagen Autostadt, I was more than just thrilled. How different is it from a train in India? What a question?

We reached the Geilenkirchen station half an hour before time didn’t seem to be a good idea as it was extremely cold. 8.37 am and DB almost always arrives on time.  We could sit anywhere as the trains are never crowded. That early it is usually the students going to universities who we find in there. Cosy. Neat. Spacious. This train was till Düsseldorf from where we had to change into the Intercity. This looked close to business class flight seats roomy, spick and span, each seat was reserved and on top of each was specified digitally from where the person is boarding and to where he is travelling. Therefore no confusion, no trespassing. We had to travel for three and a half hours with two children in a silent compartment was quite a task but kids were sort of sensing the muteness and imbibed it well. Both slept.

Was just the right time for breakfast, Raj got up to get some sandwiches and coffee from the pantry. And me as usual began checking tweets and the neighbours around us. Men in the backseat, one of them, have I seen somewhere? No, all three of them. Tcheh! Where have I seen them? Pondering is always a futile excercise for me. The one which I was very sure of was reading a book. Ok, just peek carefully and unpretentiously what is he reading? About some music band. Yes, They are a band. Which song? Bettina? Yes Yes..but which band? Blank. Oh No. My amnesia is at its peek. iphone, my savior. GOOOOOGLE. Bettina, the rap song. Enter. Images. Enter. Yes they are them seated right behind me. OMG!!! They are Fettes Brot! 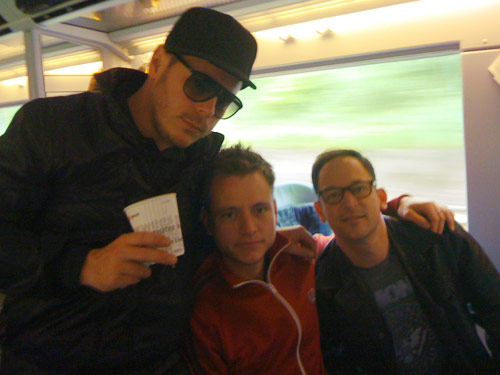 Took out my pen and the train ticket and quietly slipped onto their table. Smile. No I still don’t know what their individual names are, but they seemed surprised to receive that piece of paper, as in the entire compartment, me, an English speaking Asian was the only one who had recognized them. Cutely he asked, ‘You want autograph?’ Me like a schoolgirl recited all that I did in that past five minutes to find out who they were and ‘Can I have a pic of you all?’ Obliged. They got down at Hannover and didn’t forget to say a goodbye. Smiles.

The journey so far. Super hit.

PS: Here’s for you the superhit video of their song ‘Bettina, zieh dir bitte etwas an’. Enjoy!

Germany’s Next Top Model by Heidi Klum has shortlisted their top seven stunning ones – Leyla, Pauline, Neele, Louisa, Laura, Hanna and Alisar. Here take a look and select your favorite. My hot favorite is Leyla.

Pic of the decade 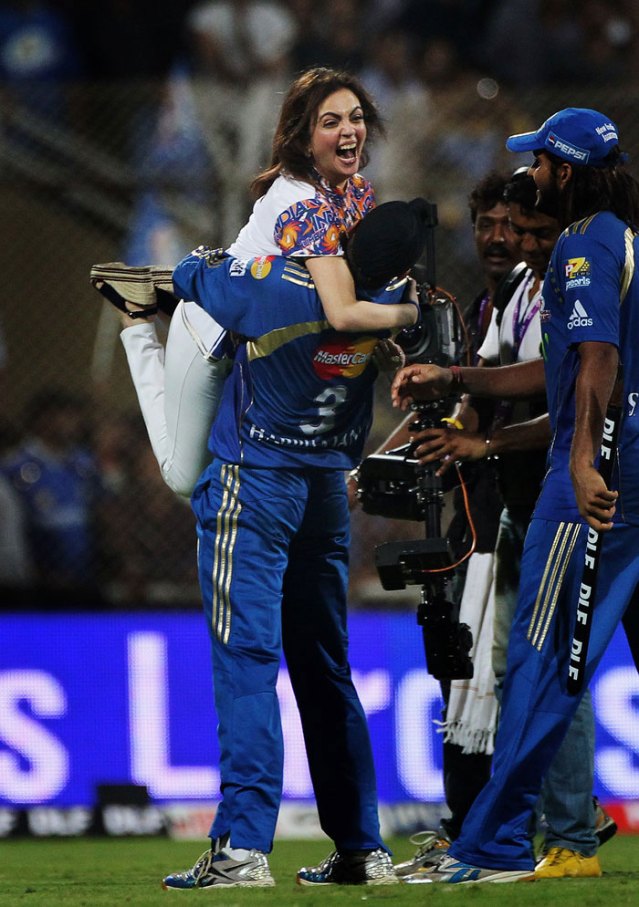 24.02.2010 Sachin Ramesh Tendulkar, the God of cricket, the unstoppable, the invincible, the ageless, yet again creates history. The only batsman to score a double ton in an ODI. At an age when others conveniently call it a day, Sachin at just two months short of 37, is uncontainable. The remarkable record was created by him in Gwalior while playing against South Africa, surpassing the previous record of 194 by Saeed Anwar. What the final score was, who finally won remains insignificant against such a monumental achievement.

I had twitter to look upto for exact scores, it was almost ball by ball commentary by around 2000 ecstatic tweeple all over India. Although most of the live streaming were dead by the time Sachin was about to touch the elusive, I was lucky to capture the moment on one of the links. The euphoria was as of never before, the frenzy was maddening and thanks to the maniacal congregation, I did not miss the way I used to watch cricket together with folks back  home, roaring.

Would like to share some lovely tweets from the twitterati done in the honour of Sachin. Enjoy.

We salute you Sachin. Take a bow.

As Sunil Gavaskar said ‘I want to touch Sachin’s feet’.

Sweet slumber.
Sketching after a long time and really enjoyed it. Made from reference from a pic I took in Croatia this summer.
During my recent trip to India, I stumbled upon my old artworks which were still stored in my college portfolio 😄 and fondly reminisced over my college days, friends, projects, first published book illustrations etc..
Dhi (thought) (30x40cm, opaque colours on 300 gsm paper).